An ongoing series of micro-videos produced for Antarctica New Zealand as a response to my 2016 residency at Scott Base, Antarctica as part of their Community Engagement Program. 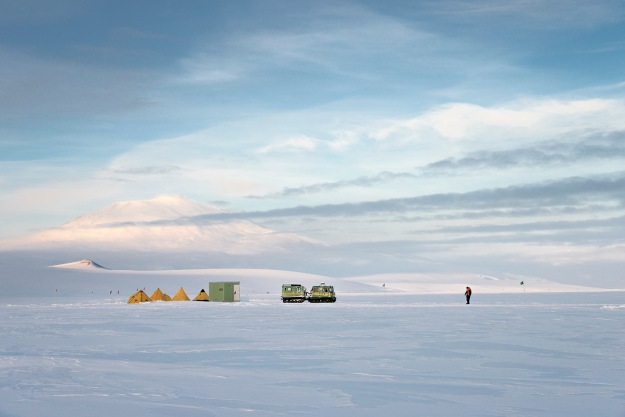 Camping in the New Zealand summer … Antarctica style. After a three hour ride in the Hagglund we arrived at our campsite for the final part of our field survival training. This shot was taken about 11.30 at night and this is about as dark as it got. The tents are pretty much the same design Scott used during his fatal 1912 journey to the pole. In the background is the ever present Mt Erebus. On the left Warren is recording the sound of the flagpoles squeaking as the move in the snow.

Some research into photography/video in Antarctic conditions.

In practice – my own findings

We went to The Ice in late October which is early in ‘the season’. At that time of year the sun is up 24hrs a day but gets very low in the sky between 12 and 2am. Really quite nice light. It did mean it was still quite cold. Most days were about -20°c  without windchill (which could easily push it down to -35°c). In short … bloody cold.

Obviously this meant wear sensible clothes. As your mother would tell you “wear a jacket”. AntarcticaNZ go a bit further and issued us with some amazing kit!. I was never really cold with the very notable exception of my nose and fingers. In order to use the cameras I often had to compromise what gloves I wore. When possible I opted for a pair of polyprop liners and some medium weight outers but even then holding the cameras was painful after 30 minutes or so. On rare occasions I took my outer gloves off to do fiddly things which I usually regretted doing almost instantly. AntarcticaNZ gave me some chemical glove warmers which helped, especially to get the feeling back when you stopped shooting.

Anything metal becomes a nightmare to hold for even a short time. I wrapped as much of the metal surfaces of cameras and tripods with thin closed cell foam and insulation taped which definitely helped.

My Black Magic Pocket Cinema Camera – wrapped in insulation tape and closed cell foam in an effort to avoid me touching metal as much as possible.

Another hassle with wearing thick gloves was that it became hard to feel my way around a lens so I would occasionally turn the focus when I wanted to zoom etc. I put a cable tie and insulation tape around focus ring to make it easier to feel and it worked a treat (see red tape on lens in the photo above).

The next biggest issue was glasses and goggles fogging. You have to wear a neck warmer or something over your mouth and nose which meant that my sunglasses tended to fog (and then freeze). Goggles where better but harder to look into the viewfinders. I do recommend the neoprene face masks with vents for nose and mouth. As expected the bright conditions made it very hard to look at the screen on the back of the camera unless it had a viewfinder on it. I found the Zacuto Z-Finders worked perfectly – no fogging.

Condensation was really only an issue when things got steamy – in Hagglund vehicles with lots of body heat or in cooking tents etc. See the tips below which helped to a degree.

On the whole batteries were not as big a drama as I was expecting. They definitely didn’t last as long as usual but the onboard batteries in the Nikons were ok. I used an external pack for the D800 for a while but the cable froze solid and snapped! The one battery type that really didn’t work well was the GoPro batteries which lasted as little as 15 minutes at -20°c. Underwater where it was only -3c they were better. The Nation Geographic crew had larger external batteries (I think they wee third party) which seemed to last better.

The cameras themselves were little troopers! Big ups to Nikon and Black Magic! All the cameras just kept on functioning without too much drama. After long periods the screens would slowly crap out. LCD’s would fade and become sluggish, the rear monitors would have pixels crap out and develop alarming lines down them (BMPCC) but they came right in the warm and the cameras kept taking pictures.

The absolute hero was my little Nikon CoolpixA – small enough to always be there, I could put it on my pocket to keep warm and even when frozen solid it kept going even though it was covered in frost and the screen went blue!

I am yet to get to the bottom of an autofocus issue with the D800 – it may be an issue with one lens. Other than that it was fine.

I used ND filters most of the time to control the 24hr sunlight. An absolute must!

All the lenses where fine most of the time. The only real issue was when my Sigma 24-105mm F4 DG OS HSM lens focus froze solid (both manual and auto-focus) after about 2 1/2hours at -20°c … but by then my fingers were so cold I didn’t care!

Microphones all worked fine – the big shotgun mic with a blimp was essential to work in the wind. As expected the audio recording on the BMPCC was … well it was totally shit … reference only. The Zoom H6 was outstanding! 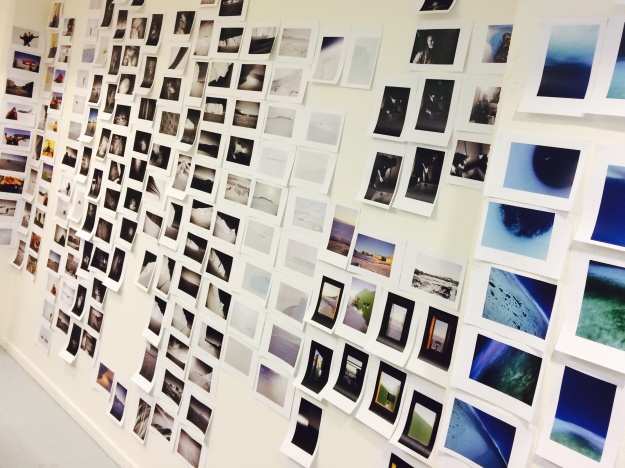 The wall of my MDes office is slowly being taken over by small prints from the Antarctica: Sixty Shades of White project. It represents a tiny proportion of the 1TB of data, stills and video I collected while on The Ice in October. It is still very early days but at least five possible collections/projects are emerging … this will keep me going for years!

Warren played a short gig at the bar in New Zealand’s Scott Base in Antarctica as part of our visit there. This is a short sample of what he played. Sean Tracey joined us from McMurdo Station (the American base) to play harmonica.

It was magical moment at the base with most of the personnel crammed into the small bar with guests from the nearby McMudo Station. Huge thanks to Scott Gilbert for bringing over the guitar etc.

As this photo of Warren on the sea ice at Cape Evans illustrates, Antarctica can feel unlike anywhere else on the planet at times. When I saw him in all his survival gear casting this massive shadow in the midnight sun I instantly thought of the photos of the astronauts on the moon (thanks NASA for making them public btw). Two harsh environments where man goes to extraordinary lengths to survive – it was about -20˚c when I took this.

The dark “landmass” on the right is in fact an iceberg trapped in the frozen sea-ice.

A bit of Antarctica fun for a Friday.

One of the first things you do when you visit Scott Base in Antarctica is to go “field training” where you learn survival techniques and spend a night camping in -20ºc.

After two hours driving in the Hagglund tracked vehicle we arrived at our camp site with Mt Erebus standing guard. We slept in tents very similar to those that Scott used and made a cooking area with blocks cut from the snow. The Field Trainers from Antarctica New Zealand were superb. That wonderfully New Zealand combination of friendly and relaxed but totally on to it and experienced.

So join Warren and I on a very quick, lighthearted look at camping in Antarctica.