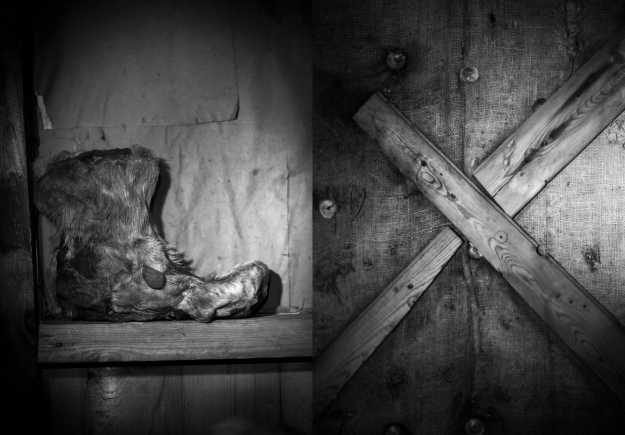 “LX” is a limited edition set of sixty photographic prints commissioned by Antarctica New Zealand to mark the 60th Anniversary of Scott Base in Antarctica.

While working with an ice dive team at Cape Evans, Antarctica in October 2016 I visited the nearby historic hut, most associated with Captain Robert Falcon Scott’s British Antarctic (Terra Nova) Expedition 1910–1913 and his second, and final, attempt for the South Pole.

I found stepping into that hut was deeply moving. Totally silent and dimly lit it stands preserved as if you are the first person to enter since Scott’s team deserted the place. So I decided to capture the feeling of visiting that moment rather than attempting to accurately document the site and artefacts, as many very good photographers have already done (notably the outstanding work of Jane Ussher in her book Still Life: Inside the Antarctic huts of Scott and Shackleton).

To recreate the mood, I lit the interior with torchlight and used my modern DSLR camera fitted with the lens from a 100 year old Kodak pocket camera. The lens is very similar to one used by photographer Frank Hurley on Ernest Shackleton’s Imperial Trans-Antarctic Expedition which set out in 1914. It gives a wonderful soft quality to the images and adds a deeper connection to the ‘heroic’ era of Antarctic exploration.

For the commission I selected and crafted this diptych to form a stylised “LX” – the roman numeral for 60. An edition of 60 prints, to mark 60 years in the form of a roman 60.  They are to be gifted to key staff and strategic partners. Antarctica New Zealand also commissioned a special edition consisting of two larger prints of the same image. One will be hung in their office in Christchurch and it’s pair to hang in Scott Base in Antarctica.